My father was a wandering Aramean (Deuteronomy 26.5). These words are a reference to Jacob. His grandfather Abraham lived a nomadic lifestyle. He drove sheep and wandered from place to place, setting up camp where he found good pasture. Sometimes he stayed for a short t 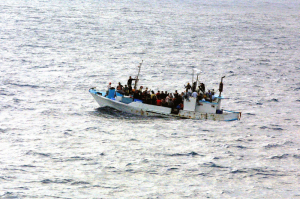 ime and sometimes he remained for weeks, months or even years. But nowhere did he settle long enough to call it home. His son Isaac and his grandson Jacob (who was renamed Israel) lived this same nomadic lifestyle. In this way they accumulated great wealth but called nowhere home.

But they travelled always with a promise. God had made a covenant with Abraham in which he promised that Abraham would be the father of nations (it’s what his name means) and that God would provide him with a homeland and that his descendants would become a people beyond counting and a blessing to the world.

During Jacob’s lifetime everything changed for the people. They were forced to settle in Egypt because of a worldwide famine. Joseph, Jacob’s son who had been betrayed into slavery by his brothers became powerful in Egypt and, after interpreting a dream of Pharaoh’s, had arranged for grain to be stored to see Egypt through the coming famine. Joseph saved his father and brothers and their families from the famine. In due course the people of Israel (as they were now known) became the slaves of the Egyptians. They called upon God to deliver them and he called Moses, miraculously saved from death as a baby, to lead them away from slavery. They resumed the nomadic lifestyle of their ancestors and for forty years journeyed to find a place where they could safely settle, eventually colonising the land of Canaan and establishing a home that they considered to be the Promised Land, the fulfilment of the promise to Abraham.

It’s a familiar and resonant story. It seems to us entirely right that God should deliver his people from slavery into freedom in a new home.

In another, shorter, biblical story Jesus (Matthew 2.19-23), recently born, is taken by his father Joseph to Egypt for safety. Joseph had been warned in a dream that Herod wished to kill the boy because he saw him as a threat to his authority and status. The family, Mary, Joseph and the boy Jesus, stay in Egypt until it is safe to return and then settle in Nazareth (out of the spotlight).

These are both stories in which a chance of a new life is offered to the main protagonists. The people of Israel seek a new life set free from the yoke of slavery, freedom to be in control of the their own lives. Joseph and Mary are seeking a chance of life for their son and a place where he might grow up without the threat of persecution and death at the hands of a tyrant king.

In spite of the events described in these stories having taken place many hundreds of years ago they feel very contemporary. Stories just like these are constantly in our news at the moment. On a daily basis we hear of a modern slave trade, even in our own country, and of people who are fleeing persecution or war and seeking a safe place to live and bring up their children.

We are told that the world is facing a huge refugee crisis as people are displaced by the horrendous situations in places like Syria, Iraq, Libya, Sudan and elsewhere. In countries such as Turkey and Lebanon there are huge refugee camps providing temporary (which quickly begin to look permanent) shelters, food, clean water, medicine and education. The Mediterranean Sea has hundreds of people crowded into boats and set adrift, having had their life savings taken by traffickers promising a chance of new life. Italy and the Greek islands are struggling to cope with the influx of desperate people arriving daily on their shores, while their EU allies stand by wringing their hands and wishing the problem would go away – all the while doing nothing. A casual observer from another planet would never guess that the United Nations has clear processes for dealing with refugees – protocols to which all of the western democracies have signed up.

There is an obvious lack of political will to deal with these situations. The scale of the problem makes it difficult, of course, and costly. But the cost of doing nothing now might become much more costly in the future.

There are no simple solutions, of course, but any solution must surely begin with the recognition that the people who are turning up on Europe’s southern shores (or even in Calais or on the UK mainland) have fled situations more desperate that we can even begin to imagine. People simply do not risk everything in pursuit of a better life if the life they are leaving is tolerable.

People in need are people in need. As a society we are losing the sense of being responsible to one another. The prevailing sense in our society is that those who are in hardship are suffering purely because of their own actions (or lack of action) and are paying the price of their own idleness, fecklessness or irresponsibility. But, we all know that this is not true – or, at least, only very rarely true. And it is certainly not true of the thousands in the world who have been displaced by the awful situations they endure at home. And if our governments won’t do anything then we must – through the Red Cross, the aid agencies and other charities. We must put pressure on our government and on the EU to do more.

It is not good enough to celebrate the Exodus and to rejoice at Jesus’s deliverance from Herod and then to stand by while millions suffer as refugees and through enforced migration. God calls us to make a difference – but what difference are we making?

I am a retired Parish Priest. I was previously ministering to five Anglican parishes in South Somerset. i currently live in Cornwall. I love rugby union and cricket. I enjoy jazz and classical music (and lots besides). View all posts by exultemus

I am a retired Parish Priest. I was previously ministering to five Anglican parishes in South Somerset. i currently live in Cornwall. I love rugby union and cricket. I enjoy jazz and classical music (and lots besides).