The fourth storm of the winter h 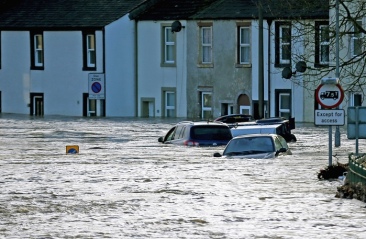 as brought chaos and anxiety to the north of the country. I know it’s the fourth storm because the Met Office now gives them names and this one is called Desmond. High winds have led to bridge closures, homes are without power, homes have been evacuated as the floods rise, the army has been called in and the government has called emergency meetings to discuss the right response to the crisis. All of this at the same time as the Paris Climate talks are taking place as world leaders endeavour to find a way to agree on the measures that need to be taken to minimise the effects on the world of global warming.

The current storm and its effects may have nothing, in themselves, to do with global warming, but it remains hard not to link the two. Extreme weather events seem to be happening with more regularity – two years ago the Somerset levels spent several weeks under deep water; a change in the pattern of our weather is a common topic of conversation.

During this Advent I have been following a series of podcasts from A Rocha, a Christian Conservation organisation. The speakers have stressed the importance of Christians doing what they can to take care of our planet.

What can Christians do? Pray – of course. Prayer changes the world by changing those of us who pray. How can we pray for the environment if we then play our part in protecting it? Lobby our leaders, campaign for policies and initiatives which benefit rather than damage the environment. But we must not forget those small actions which make a difference and which we can all do. Some are easy – turning off lights, driving less, recycling more, turning down the heating a degree or two. Others are a bit harder – checking the food miles, eating less meat, supporting local suppliers. These are all tiny things, perhaps even gestures, on their own but if we all were to do it the difference made would be enormous.

As Christians we must surely believe that we have a responsibility to and for creation. Our creation story (Genesis 1 & 2) tells us that we were given stewardship of the natural environment. But the very fact that we are said to have been made in the image of God implies that we share his responsibility for his creation.

I am the Parish Priest of five Anglican parishes in South Somerset. I love rugby union and cricket. I enjoy jazz and classical music (and lots besides). View all posts by exultemus

I am the Parish Priest of five Anglican parishes in South Somerset. I love rugby union and cricket. I enjoy jazz and classical music (and lots besides).